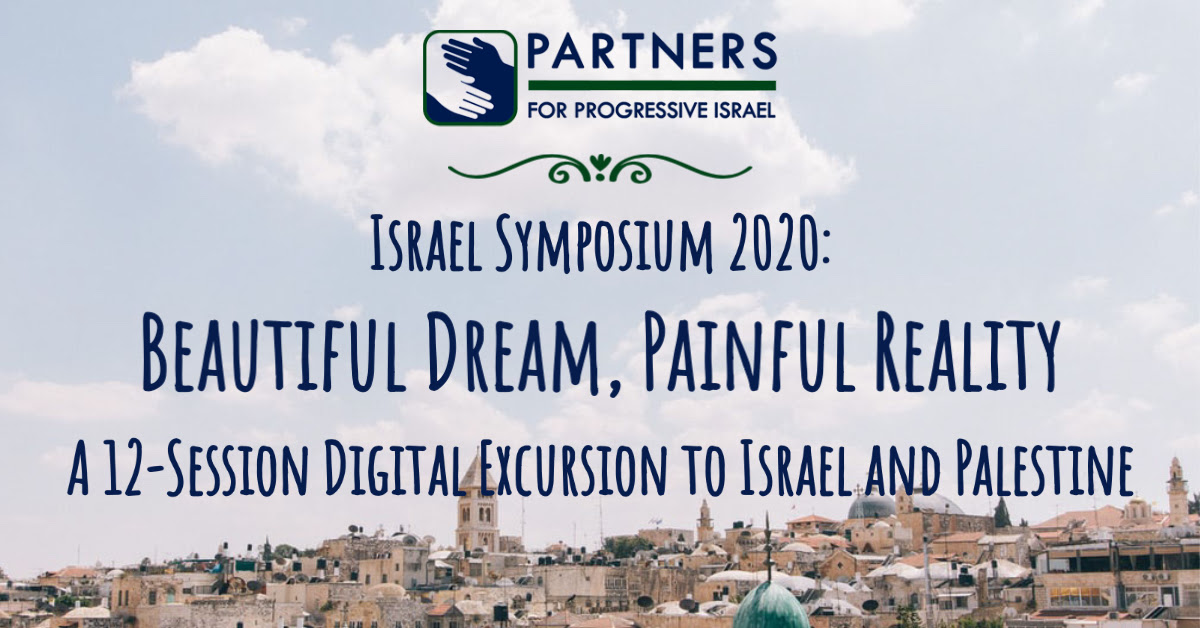 Partners for Progressive Israel is excited to announce our 2020 Israel Symposium.

For the past 30 years we have led groups on a progressive political trip to Israel.

This year, for the first time, you won’t have to fly to Israel — the symposium will be brought to you digitally.

At the birth of Israel, many Jews in America and elsewhere dreamed a dream: Israel would be a safe haven for Jews in a post-Holocaust world; Israel would be an authentic social democracy; Israel, as the prophets declared, would be a light unto the nations. Today, 72 years later, participants in this virtual excursion to Israel and Palestine will explore ways in which Israel has lived up to its prophetic calling and ways in which it has failed to do so.

Encounter, first-hand, leaders who will speak to the possibilities of a just peace between Israel and Palestine.
Examine Israel’s triumphs and disappointments in the realm of human and civil rights.
Look at challenges to Israel as a self-proclaimed Jewish and democratic state.
Meet key policy makers and civilian leaders in both Israel and Palestine and engage with them in direct dialogue.
Assess what they have heard in follow-up discussions with fellow Symposium members.
Adventure into the current realities of a country born of a dream.

Each session will have ample time for dialogue with the participants.

Visit the Knesset,
Go into the West Bank and Gaza,
Discuss Two-State, One State, Confederation?
Hang out with the NGO Leaders, the Voices of Hope,
Debate how to Preserve a Jewish and Democratic State,
Wrestle with issues of equality for Israel’s Palestinian citizens.