In her multimedia presentation, Balstan broke down Hatikvah into three parts: melody, lyrics and orchestration. Each element of the song, she said, proved the strength and unity of the Jewish people. She also detailed the histories of those involved in creating the song, and shared her research into those backgrounds.

The more than one hundred audience members were all astonished and fascinated by Hatikvah’s past. “Astrith was an outstanding storyteller, and by looking at the pictures and movies of our Zionist history we remembered and fell in love with Hatikvah,” said Marlene Post. It’s a meaningful and captivating experience, agreed Mindy Stein. “[We felt] the undying hope, through years of exile, to be a free people in our land!”

“Hatikvah” was sponsored by the American Zionist movement, the World Zionist Organization and the Consulate General of Israel in New York. 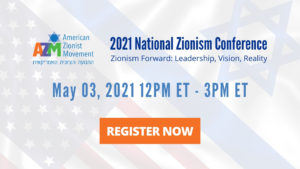 “What Makes a Great Jewish Leader? The Life and Legacy of Theodor Herzl” with Prof. Derek Penslar