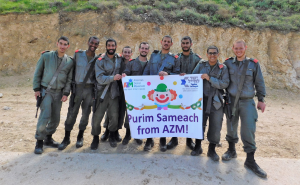 An important aspect of Zionism is maintaining our global Jewish unity and our personal ties to the people and land of Israel. Therefore, for nearly 30 years the “Purim Connection” program of the American Zionist Movement has helped maintain that bond by providing Mishloach Manot packages to those living in and protecting Eretz Yisrael.

This year, for the 2018 Purim Connection, the American Zionist Movement collaborated with its member organizations, networks and volunteers in Israel on two exciting projects in celebration of Purim. This includes partnerships with our Purim Connection coordinating partner, the Israel Forever Foundation, along with  Yad Ezra V’Shulamit, Yashar L’Chayal, AMIT Children and Bnei Akiva.

Mishloach Manot – baskets of treats – were distributed to impoverished Israeli children and to Israel’s Border Police “Magav” (מִשְׁמַר הַגְּבוּל) to bring Purim joy to the guardians and citizens of Israel. The brave men and women of the Border Police guard and protect the State of Israel and are often the first line of defense against urban and cross-border terrorism.

The Purim baskets were distributed with the help of the Israeli organization Yad Ezra v’Shulamit whose main goal is to help end hunger among Israelis. Miri Schreiber, the volunteer coordinator of the organization, wrote to AZM the following heartfelt thank you note: “Thank you once again for helping increase the Purim joy. It was a true testament of the power of unity, bringing together different groups within the ‘Klal’ for such a beautiful case. May we continue to work together to change the face of poverty in Israel.”

Members of the Border Police sent videos thanking AZM and our partner organizations for organizing the Purim initiative and for providing them with Mishloach Manot. Austin, a lone soldier from Colorado who drafted into the Border Police, spoke emotionally about how truly wonderful the initiative was, and how deeply appreciative their entire unit was of the caring gesture.

In addition, Amichai Bacharach from Yashar Lachayal – an organization aimed at providing support to IDF soldiers – thanked AZM by mentioning that “the soldiers were thrilled to receive them! They thought that it is amazing that so many people care about them from overseas, and they were also happy with the quality of the mishloach manot themselves.” 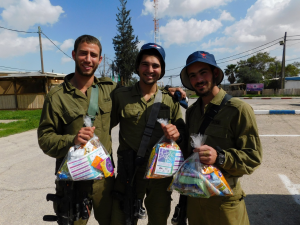 The Border Patrol is a special unit that is under the auspices of – but separate from – the Police Dept. of Jerusalem. They are a joint force between the army and the police, and the Border Patrol also works with officers from both. When Israeli young adults are drafted into the IDF, some are offered a job in “Magav”, which is the Border Patrol. If they accept the assignment, they are trained as specialty police officers, and technically do not serve in the IDF. The Israeli Border Police is renowned for including a large number of soldiers from minority backgrounds, being a particularly popular choice with Druze recruits, but also includes many soldiers from Arab Christian and Bedouin background.

Some go on to choose this as a career, and some move from the police dept or army into Magav, and are professionals, as opposed to those fulfilling their 3 (or 2) year national service commitment. The “magavnikim”, or border patrolmen/women do get called back for “miluim”, reserve duty, but fulfill that reserve duty within the Border Patrol, not the IDF. The Border Police has recently become among the most popular and competitive combat units for new IDF recruits, presumably because of the increase in tensions and violence in Jerusalem and surrounding areas.

Through the 2018 Purim Connection, AZM sent over 400 packages to the Border Police women and men and just as many to Israeli children that enabled them to receive some Purim joy, and we are so thankful to our supporters who allow us to carry on such meaningful projects.