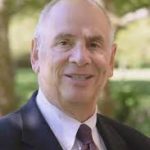 Jim has devoted his life to the Zionist movement.  He is the Chairman of the Board of the Baltimore Zionist District and serves on the Cabinet of the American Zionist Movement. He also is a Vice President of World Confederation of United Zionists.

Jim also was a National Vice-President, National Treasurer and National Associate Treasurer for the Jewish National Fund. He currently serves on its Board of Directors.

Jim was an elected delegate to the 31st, 32nd, 33rd, 34th, 35th, 36th and 37th World Zionist Congresses.  He has served on the Presidium of the Congress and is currently a member of the Expanded Executive and the General Zionist Council of the World Zionist Organization. He also is currently a member of the Board of Governors of the Jewish Agency for Israel.