70 years ago today – on July 18, 1947 – a seminal event in Zionist history occurred in the Port of Haifa, when the S.S. Exodus finally reached the shore of the land of Israel.  This ship, carrying 4,515 Holocaust survivors seeking refuge from Europe, had a harrowing week-long journey from France to bring new Jewish immigrants to Israel, then under the British Mandate for Palestine.  Along the treacherous sea voyage the boat was attacked by the British Navy and three passengers were killed and 147 injured.  After the Exodus ship arrived in Haifa its passengers were forced by the British to return to Europe in another horrible voyage.

News of the story of the S.S. Exodus reverberated throughout the world and helped turn public opinion in favor of the formation of a Jewish homeland in Israel.  It was just a few months later, on November 29, 1947 that the United Nations voted in favor of Partition, leading to the creation of the State of Israel in May 1948.  The late great journalist Ruth Gruber called the S.S. Exodus the “The Ship that Launched a Nation.”

The American Zionist Movement (AZM) is pleased to commemorate this historic S.S. Exodus anniversary, by sharing the materials below prepared by the Israel Forever Foundation (IFF), an AZM affiliate organization.  This outstanding compendium includes links to many articles, essays and photos on the S.S. Exodus, and a comprehensive “Journey to Statehood” informational booklet which can be downloaded here.

The American connection to the S.S. Exodus is significant, as it was an American vessel, originally sailing from Baltimore, which was purchased by American donors to transport refugees and its crew were American volunteers.  Today, in Haifa a memorial to the S.S. Exodus was dedicated, under the sponsorship of the Jewish American Society for Historic Preservation, in partnership with the Jewish Agency for Israel. AZM encourages all American Zionists to pause today to remember the significance of the S.S. Exodus and to share the IFF materials widely with your friends, family and colleagues.

Shalom friends,
Seventy years ago, on July 18, 1947, outside territorial waters near the coast of British Mandate Palestine, the British navy rammed a ship carrying 4515 Holocaust survivors with dreams of returning to our ancient homeland. This ship is forever known as Exodus 1947, their story forever a part of our collective experience in our fight for freedom, independence and our Jewish State. 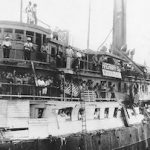 Exodus 1947: History in the making

The war with Germany was over, but for thousands of Holocaust survivors, the fight for survival was far from won. The Exodus 1947 left France in the morning of July 11 carrying 4,515 passengers who could never envision the fate that was about to unfold. 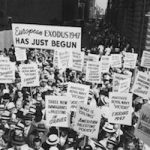 The Exodus 1947: A global cry for Jewish justice

Global support for the plight of the Jews aboard the Exodus 1947 had a major influence on the Jewish connection to Israel and the move towards re-establishing an Independent State of Israel. 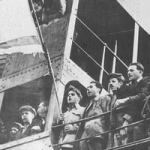 The Meaning Of Exodus

The value of the Exodus story isn’t in its romanticism. It is in the impact it had on Jews around the world in understanding the need for a Jewish state, the fulfillment of the ancient dream that would soon become reality. 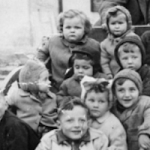 Children Of The Exodus

The lives of the children of the Exodus is aptly captured in the historical film created by UJA on their quest to trace what became of the children after they built their lives in Palestine. 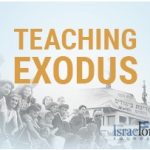 It is the transmission of memory – of the human experience and the events surrounding it – that will carry the legacy of the Exodus into the future. Now is the time to connect the next generation with the story of the Exodus and its significance as a step toward statehood. Come explore our resources, testimonies, discussion questions, and art activities to bring to your community now or anytime throughout the year.

BRING THE EXODUS EXHIBITION TO YOUR COMMUNITY

Just as we inherit the memories of the Shoah, so too, must we learn from and transmit the legacy of the Exodus as a part of their story. We must know the facts, and understand the circumstances. We must teach of the passion which drove the volunteers, passengers and fighters to endure endless struggles toward the fulfillment of our ancestral dream. We must inherit their determination and imbue tomorrow’s youth with a shared commitment toward the continuation of our nationalist vision – to protect our land, our history, our heritage, our memory, our peoplehood, our freedom in our Jewish sovereign state.

Exhibit it at your synagogue, community center, school, camp or library.

Now or anytime throughout the year! 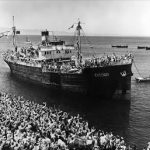 Donate to Support Zionism in America