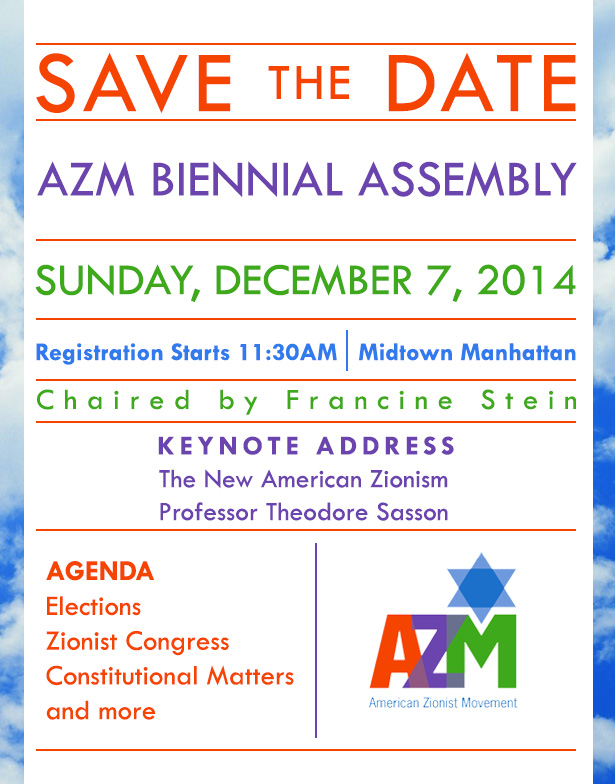 The American Zionist Movement will host its Biennial Assembly on Sunday, December 7, 2014, at UJA Federation in Midtown Manhattan. The event will feature a review of internal AZM matters, a discussion of upcoming AZM and the World Zionist Organization programs and an update on the elections to the Zionist Congress.

​Professor Theodore Sasson of Brandeis University will deliver the keynote address about The New American Zionism. His remarks will be couched within his recent analysis of American Jewry’s Relationship to Israel before and after this summer’s Gaza War. He will address such questions as “Did Hamas rocket fire galvanize the world’s largest diaspora community and strengthen its connection to the Jewish state? Or did Israel’s tough military response divide American Jewish opinion and alienate the younger generation? In this lecture, Professor Sasson will present new evidence concerning American Jews’ responses to the Gaza war, and discuss general trends in their relationship to Israel.

Sasson’s broader findings, reported in his recent book, The New American Zionism, challenge the widespread notion that American Jews are distancing themselves from Israel.

Visit here to see the Program.  Registration will begin at 11:30 and the program will begin at 12:00 Noon. The Biennial will be held at New York UJA-Federation, 130 East 59th Street in New York City.

​Those attending the Biennial are also encouraged to stay for the regional meeting of the Zionist General Council, which follows the Biennial. That meeting will discuss programmatic opportunities, relations between the WZO and its diaspora constituents, and plans for Congresses and beyond.

Register for the Biennial here.