For a guy who was laid to rest in 1904, Theodor Herzl sure gets around. 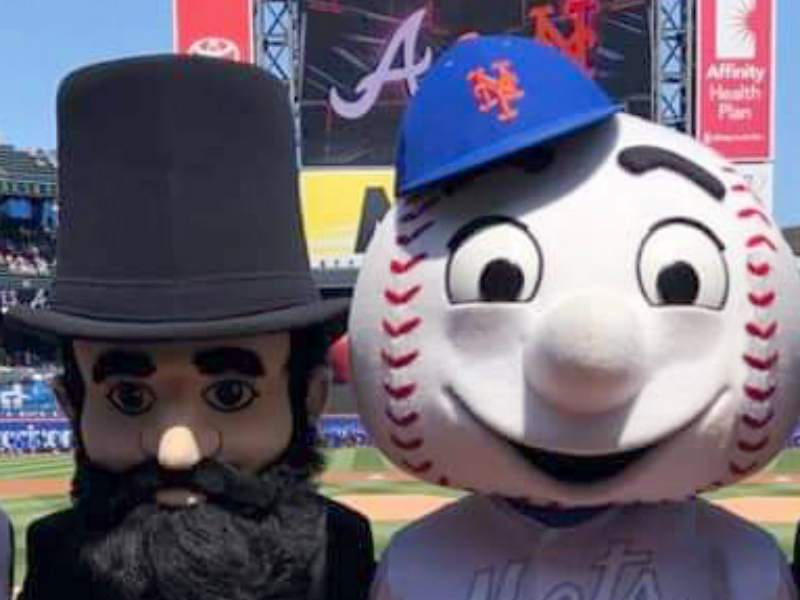 (The Canadian Jewish News) Herzl, an Austrian Jewish journalist, playwright and lawyer, is best known for his critical role in establishing the modern state of Israel. His pamphlet, Der Judenstaat (The Jewish State), published in 1896, launched Zionism as a modern political movement with the objective of establishing a Jewish homeland.

Although Herzl died 44 years before its creation, he is commonly considered the father of the Jewish state.

Today, 115 years after his death, Herzl’s unrelenting message about the need for a Jewish state is as relevant as ever, due to the current political climate and a worldwide resurgence of anti-Semitism.

Like his message, Herzl’s popularity has enjoyed a resurrection over the last year, thanks in part to a mascot-style costume of the Budapest-born, Vienna-bred visionary. The larger-than-life, cartoonish Herzl, known affectionately as Theo, has been introduced to audiences at a wide range of events across North America in the past year. The Herzl costume, which is inhabited by community volunteers in each city, is the brainchild of Toronto lawyer and well-known Herzl enthusiast David Matlow. Theo, originally commissioned for the 2015 UJA Federation of Greater Toronto’s Walk With Israel, has been racking up frequent flier miles ever since.

Over the past year, Theo has been greeting and embracing fans while demonstrating the importance of the State of Israel in New York, Washington, D.C., and Las Vegas.

“We were fortunate to have had Theo join us last December for the Embassy of Israel’s Hanukkah reception,” says Molly Tobin, director of special projects for the Israeli Embassy in Washington. “We were delighted he was able to come back to Washington to take part in the Embassy of Israel’s Yom ha-Atzmaut celebration, where Theo was introduced as ‘the great visionary of modern Zionism.’ Certainly his introduction on the stage was an exciting surprise for our guests. Having Theo there was a wonderful opportunity for us to link the foundations of modern Zionism to a moment where we were celebrating the 71st year of Israel’s independence.”

Herbert Block, executive director of the American Zionist Movement, says his organization is “pleased to have been hosting Theo” in the New York City area.

“In recent months, Theo has made appearances at various meetings and events, and has also marched up Manhattan’s Fifth Avenue in the annual NYC Celebrate Israel Parade for the past several years. In August, Theo attended his first baseball game and appeared on the field as part of the NY Mets’ Celebrate Israel Day pre-game ceremony. Having Theo at events is a fun way for many to connect to Zionism and to see a leader of our movement up close,” added Block.

“Every year, the Israeli-American Council hosts a Celebrate Israel Festival,” says Noa Peri-Jensch, the group’s regional director in Las Vegas. “Some 4,000 people attended this year’s festival at the Sands in Las Vegas. So many organizations and people are stepping away from Israel and Zionism. When I saw Theo on Facebook from Canada, I knew right away I needed him at the festival.

“Herzl represents so much to me and to our community, and inspires our daily work supporting Israel and Zionism. Now more than ever, we need to send a message to our children and young people that Zionism is our essence. Herzl represents this essence, this dream. He is the brave one that stood up and said ‘Let’s bring our people back to our homeland,’ helping to fulfil the Torah’s promise in Parashat Lech Lecha. Theo’s visit absolutely had a positive effect on the Las Vegas Jewish community.”

Theo’s creator couldn’t be prouder of Theo’s popularity with North American audiences, and is quite certain that Herzl himself would be equally proud.

“I created Theo as a vehicle for people to learn about Herzl,” says Matlow. “The State of Israel exists, so we no longer feel it as the miracle that it is, and that risks us taking it for granted. If you know about Herzl, you know where Israel came from, why we needed it and still do, and hopefully you are inspired to continue to actualize Herzl’s dream. The fact that Theo is on tour means he is wanted. The real Herzl would be pleased to know that.”