Bring the Israeli Social Protest to Your Community 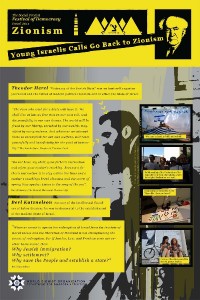 Bring the Israeli Social Protest to your community, synagogue or school!

Over the summer Israelis took to the streets to protest on various social matters ranging from housing & healthcare to education & animal rights. The World Zionist Organization Department for Diaspora Activity has created an amazing visual art exhibit that gives insight into the movement through imagery and provocative questions and discussion topics. The kit provides information on the goals of the movement and how social justice fit in, highlights Jewish values, what role Zionism played, and how people in the United States can relate to Summer 2011’s Tent City Tel Aviv activities.

The kit includes 10 posters, a leader’s guide on how to use the kit,  Jewish & Zionist texts, and articles connecting the US. Plus, some t-shirts for leaders and participants!  Here’s a brief overview of the posters and content:

Daily Routine & Culture- Experience the true Israeli counter-culture, alternative school, community kitchens, and intellectual gatherings! The “tent cities” were festive, there was no money to purchase food, everything was donated, people shared spaces, scheduled organized meetings and protests and used each other as resources to get their message heard.

Zionism – “No, Zionism would not have arisen–and will not stand–in a world that denies Justice, Law, and Freedom to all who are created in the Divine Image, and it won’t repudiate these human values, for in these [Zionism] will have to judge itself.”   Those are the words of Berl Katznelson, one of the most prominent leaders of the Zionist movement. Explore how the protesters sought to revive and re-connect with the Zionist dream.

Jewish Identity- On Yom Kippur it is custom to read from the Book of Isaiah, the passage– “share your food with the hungry and to provide the poor wanderer with shelter— when you see the naked, to clothe them,  and not to turn away from your own flesh and blood!”- Discover how the protesters came to understand the bond between Judaism and their call for social justice.

Social Justice- The overall theme of the protest, what is social justice and what Israelis want from it. Justice for animals, people, the environment and everything in-between.

Democracy & The Protest- Celebrating Israeli democracy all spectrums were heard. There was no political agenda in the protest, people wanted to forget the “Left & Right” and focus on the immediate needs for the Israeli people

Housing- Educate your groups about the living situations for Israelis in the cities. With soaring prices and not enough cheap places to live, Israelis made their concerns heard by creating “Tent Cities” in Tel Aviv and other areas to show their need for affordable homes is imperative to the future of Israel.

Health- Israel has one of the best public healthcare systems in the world, still, households are finding an increase in healthcare bills as costs rise and people are unable to afford treatment. Demanding for reform in this sector was a huge component to the protests.

Education- Education has always been a part of the Jewish life and now in the Jewish State , nearly 250.000 hours of classroom time has been cut over the last decade as budgets have dwindled, teachers are being paid less no matter their experience and classrooms are starting to fill up past capacity.

The Diversity of Protesters- The protest was composed of variety of social, political and ethnic groups. The ages spanned across young and old, college students to working class, but their were some perspectives missing. The kit explores those who were present but also begs the question- who was missing?

See with your own eyes what the Israeli Social Protest was all about…order today or schedule for one of our educators to come to you.

Posted in Programs, WZO Department for Activities in Israel