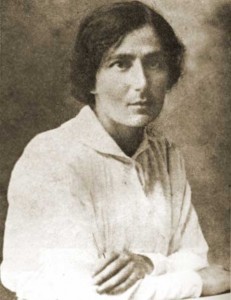 Rachel the Poetess (1890-1931) as she is more famously known was born in Russia.  Her father was a wealthy merchant who was known to be very generous and her mother was and educated woman that came from a long line of rabbis.  Rachel was also well educated, learning Hebrew from a private tutor and writing poetry at a young age.  In 1909 Rachel took her first trip to Palestine.  While there she met and was highly influenced by Hannah Maizel, one of the first pioneers who had decided to create an institution where young women could learn agricultural techniques.  Though the visit was short a year later Rachel returned to Palestine and again found and began working with Hannah Maizel.  Rachel is considered one of the Zionist pioneers in Kvutzat Kinneret and kibbutz Degania.  At the encouragement of Maizel Rachel returned to Europe to become an agronomy student at the University of Toulouse.  Unfortunately she was there at the outbreak of World War One.  Unable to return to Palestine she returned to Odessa where she contracted tuberculosis while caring for refugee children.  Rachel did eventually return to her beloved Palestine but sadly succumbed to the tuberculosis.  Writing poetry all her life, the majority of her poetry is set in the pastoral countryside of Eretz Israel.  Most of her poetry was published during her last six years. Today Rachel the Poetess is well known to the children throughout Israel as her poems are included in the mandatory curriculum in the schools.

The Institute for the Translation of Hebrew Literature