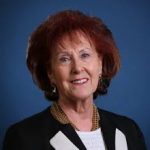 Marlene E. Post served as the 21st National President of Hadassah and past President of Hadassah International. Marlene serves on the Board of the American Zionist Movement, the Board of Directors for the Jewish Agency for Israel (JAFI) and chairs the Jewish Agency Assembly Meeting. She is a member of the Executive Board of Directors of Birthright Israel North America. Additionally, Marlene was Chairman of the AZM National Board from 2008 – 2012, a Co-Chair of the Confederation of United Zionists and honorary Co-Chair of the National Coalition for Literacy. She has served on the Executive Board of the World Zionist Organization, as well as on the boards of the State of Israel Bonds, the Advisory Council of the New York Board of Rabbis, the Jewish Community Relations Council of New York, and the UJA Federation of New York.