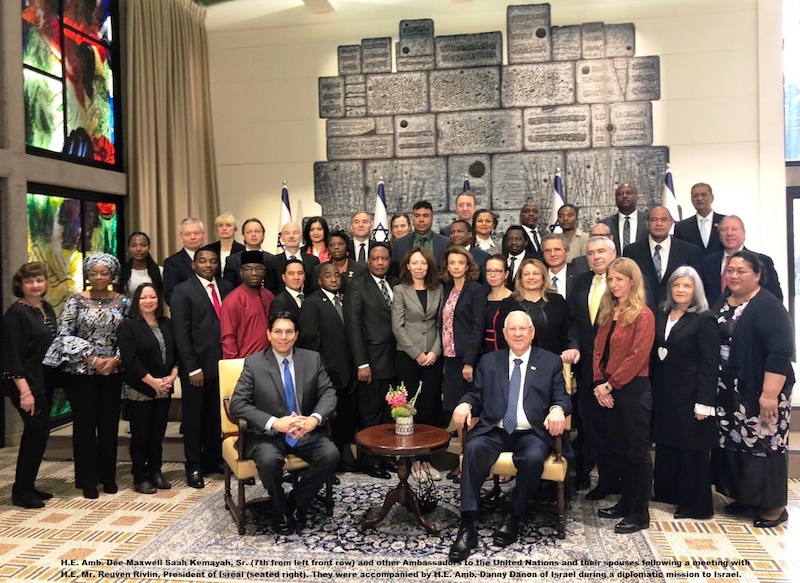 (New York, January 7, 2020) Liberia’s Ambassador Extraordinary and Plenipotentiary and Permanent Representative to the United Nations, His Excellency Ambassador Dee-Maxwell Saah Kemayah, Sr., joined Twenty-two (22) Ambassadors to the United Nations to participate in a recent one-week Diplomatic Mission to Israel and a Holocaust Remembrance Program in Poland.

The Diplomatic Mission and Remembrance Program organized by the American Zionist Movement and International March of the Living in collaboration with the Government of Israel is an annual event that provides Ambassadors to the United Nations an understanding of Israel’s national political landscape and geo-strategic concerns.

The President of Israel, His Excellency Mr. Reuven Rivlin, welcomed the delegation of Ambassadors to the United Nations to Israel. In a meeting with the Ambassadors, President Rivlin disclosed that over the last Seventy-two (72) years, Israel has been transformed from a developing state into a start-up nation and innovation hub and was ready to share its expertise with all nations for the advancement of the Sustainable Development Goals (SDGs) of the United Nations.

During the Diplomatic Mission to Israel, Ambassador Kemayah and other members of the United Nations Ambassadorial delegation met with other Israeli Government officials, hi-tech and business leaders, and representatives of Civil Society; and were opportune to tour several facilities including the City of David, the Southern Border of Israel, Tel Aviv and Yafo, the Israeli Innovation and Technology Center, the Israel National Cyber Directorate, Via Dolorosa and Church of the Holy Sepulchre, Western Wall, Masada and the Dead Sea and the Old City of Jerusalem including Christian Quarter.

Earlier in Poland, Ambassador Kemayah, along with with His Excellency Ambassador Sven Jürgenson of Estonia and His Excellency Ambassador Ion Jinga of Romania, as part of a special Holocaust Remembrance Program, laid a wreath at the Majdanek Concentration Camp, where Two hundred thirty thousand (230,000) people, including One hundred eighty thousand (180,000) Jews were gassed to death. Also in Poland, the Ambassadorial Delegation visited the Polin Museum and were taken on a sightseeing tour of Warsaw.

In an interview with journalists in Israel during the visit to the Southern Border of Israel, Ambassador Kemayah described the visit as an opportunity to gather first-hand information on the socio-political conditions in the region and stressed that the visit reinforced the resolve of Ambassadors to the United Nations to continue to work towards the sustenance of global peace and security. 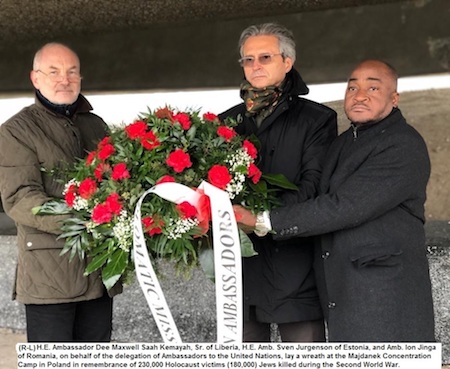 Said Ambassador Kemayah: “What we’ve seen reinforces our resolve as Ambassadors at the global body–the United Nations, to work towards the sustenance of global peace and security; ensuring that all humans live together in peace. We, as the United Nations, need to ensure that the world, which is now a global village, is a safer place for our children’s children– a safer world than what we have now. Fortunately, I come from a Country–the Republic of Liberia, where our President His Excellency Dr. George Manneh Weah is a world symbol of peace. He’s an Ambassador of peace who wants to see all humans live in peace.”

On Liberia-Israel relations, Ambassador Kemayah asserted that there subsists very good ties between the two countries–Liberia and Israel, evidenced by the recent visit of His Excellency Dr. George Manneh Weah, President of the Republic of Liberia to Israel. Ambassador Kemayah expressed the hope that the relationship between Liberia and Israel will be further strengthened to continuously benefit both nations nationally and globally.

Meanwhile, on the sidelines of the visit, Ambassador Kemayah chatted with the Chairman of the Shomron Regional Council Yossi Dagan and informed him of opportunities for investments in Liberia.

Ambassador Kemayah also explored the possibility of establishing sister city relations between the Shomron region and major cities in Liberia and invited Chairman Dagan to visit Liberia along with investors from his region to explore investment opportunities. The Shomron region provides municipal services for the Thirty-five (35) Israeli settlements in the Samarian hills.

In response, Chairman Dagan accepted Ambassador Kemayah’s invitation and instructed the Head of International Relations and Advisor to the Mayor of Shomron Mr. Chen Ben-lulu to work out the modalities for a possible visit to Liberia in 2020 with Ambassador Kemayah. The Permanent Representative of Israel to the United Nations, His Excellency Ambassador Danny Danon expressed willingness to accompany the delegations to Liberia.
In more chats, Ambassador Kemayah spoke with the Chairman of the Mountain top Production Hezi Bezalel, the President of Berexco LLC Oil and Gas explorations, Mr. Adam Beren, the President and Chief Executive Officer of Global Partnership Forum, Mr. Amir Dossal, and informed them that Liberia is ready for business and investments in all sectors.

Ambassador Kemayah was accompanied to Israel and Poland by his wife Reverend Mrs. Dialokai Golanyon-Kemayah. The visit to Israel and Poland by Ambassador Kemayah and his wife was at the invitation and expense of the American Zionist Movement and the International March of the Living, organizers of the annual Diplomatic Mission in collaboration with the Government of Israel.